Sublimation is the process in which a material changes from a frozen solid to a gas without passing through the liquid state. Whether a material will sublimate, melt, or vaporize depends on the temperature and pressure of its environment. For example, if the pressures are low enough, water ice will turn directly into water vapour as the temperature increases, bypassing the liquid water stage. 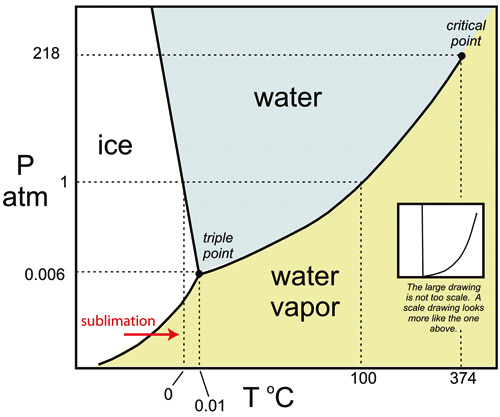 An example of a material that sublimates here on Earth is frozen carbon dioxide, CO 2 , often called 'dry ice'. At room temperature and atmosphere of pressuric, frozen CO 2 turns directly into a gas. Sublimation occurs in many places in the Solar System. Two examples are the sublimation of water from cometary nuclei as the comet approaches the Sun – this takes place in the vacuum of sopace - and the sublimation of the polar ice caps on Mars during the Martian summer.