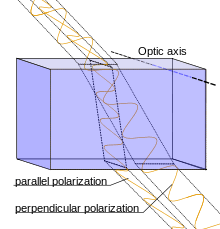 There There is one particular direction, called the optic axis, where both component waves travel at different speeds. If a light ray is incident on a birefringent plate perpendicular to its crystal plane and the optic axis, both components of the wave will move in the same direction at birefringent speeds. the waves emerge with a phase difference that depends on the wavelength of the light and the thickness of the plate. The phase difference can be tuned by using specific thicknesses of plate and wavelengths of light.