The Greeks assumed the Earth to be at the centre of the Universe, and everything - Sun and planets - to move around it. All other celestial objects are on the surface of a giant sphere. The Greeks assumed that all heavenly bodies moved along perfect paths. Nothing being more perfect than the circle, they should all move on circles.
A problem arises though when actually observing the motions of the planets. Sometimes the appear to reverse direction as seen from Earth. To preserve the theory that the Earth was at the centre of the Universe, the Alexandrian astronomer and mathematician Ptolemy about ad 150 and recorded by him in his Almagest and Planetary Hypotheses. To preserve the substantial part of the theory, Ptolemy introduced the idea of epicycles - a smaller circle on the large circular orbit of a planet. 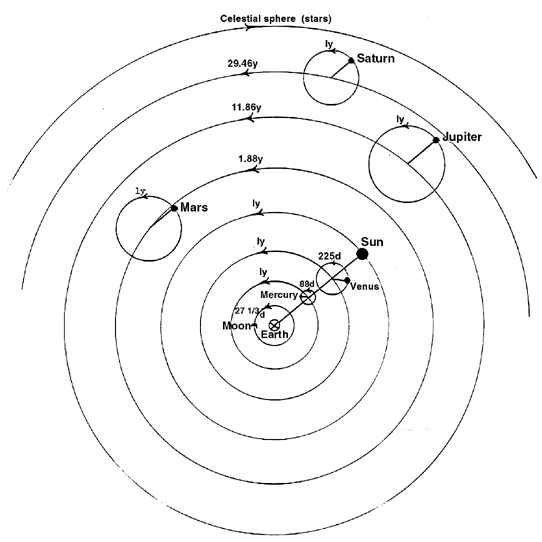 The resulting Ptolemaic system persisted, with minor adjustments, allowed quite accurate predictions of most phenomena and dominated thought for almost 2,000 years.