Usually when the moon passes between the Earth and the Sun, the Moon's shadow passes completely above or completely below the Earth, because the Moon's orbit is tilted at about a five-degree angle to the Earth's orbit.

Only when the moon and Earth's orbits around the Sun intersect can a solar eclipse occur. As it turns out, when the new Moon appears within 18-3/4 days before or after an intersection, a solar eclipse will take place. This creates a 37-1/2-day time window for eclipses – an 'eclipse window'.

If the intersections were stationary in space, eclipses would occur at the same two periods of time every year, six months apart, but the intersections are rotating around the Sun, regressing slowly. The alignment happens 18.6 days sooner per annum. The result is that the eclipse seasons gradually shift earlier and earlier each year, with a solar eclipse at a new Moon that falls within the window.

Just such a longer cycle, called the saros cycle – nearly 19 solar years with a difference of 0.46 years in 6586 years - was discovered by Babylonian astronomers in ancient times. The&nbsp;saros&nbsp;(meaning &quot;repetition&quot;) lasts exactly 223 lunar months or 18 years 11-1/3 days (or 18 years 10-1/3 days if five February 29ths fall within the period).

The paths of totality for successive eclipses in this saros series change in a regular pattern every 18 years. The paths, which are similar in shape, gradually widen and shift to more northerly latitudes. The longitude for each successive eclipse in the series shifts to the west a little more than one third of the way around the globe.

A series of eclipses, each separated by this 18-year 11-1/3-day cycle, is called an saros series. Because the resonance between 19 eclipse years and the saros is not exact (there is a 0.46 day difference), a saros series cannot go on indefinitely. Eventually a series reaches a point when the eclipses are no longer visible; the umbra passes too far above or below the Earth to be seen. A single saros series spans over 1,200 years and includes between 68 and 75 solar eclipses. 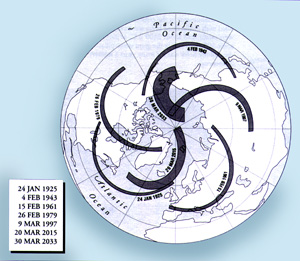 The repetition of eclipses at a given place on the Earth appears to follow&nbsp; no discernible cycle . Partial phases of solar eclipses can be seen about every 2-1/2 years from any particular spot on the Earth. The best estimate for total eclipses is to say they recur at the same location about every 360 years on the average. This figure is based on the average area of the paths of totality, the total surface area of the Earth, and the overall frequency of total eclipses. This is not very accurate: the Moon’s umbra never passed over the city of London during a period of 837 years between consecutive total solar eclipses in 878 and 1715 Angola in southern Africa to witness almost 5 minutes of a total eclipse on June 21, 2001, you can return to the same spot three eclipse seasons later for two minutes of totality on Dec. 4, 2002.