When a radioactive material decays via beta emission, a beta particle (an electron or a positron) is emitted. Electrons and protons are labelled

respectively. During electron emission, an electron antineutrino is also emitted, while positron emission is accompanied by an electron neutrino. Beta decay is mediated by the weak force.

Emitted beta particles have a continuous kinetic energy spectrum, ranging from 0 to the maximum available energy – from a few keV up to a few tens of Mev - characteristic of the particular decay. Since the rest mass energy energy of the electron is 511 keV, the most energetic beta particles are ultrarelativistic, with speeds very close to the speed of light.

) while emitting an electron,

and an electron antineutrino,

This is due to the conversion of a down quark to an up quark by emission of a W−boson; the W−
boson subsequently decays into an electron and an electron antineutrino. 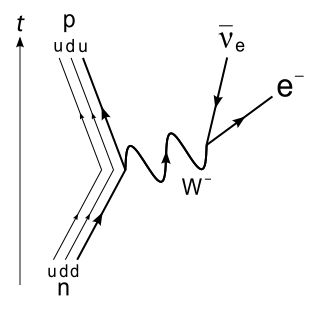 The number of protons goes up by one. This means the atom becomes a different element.

decay , energy is absorbed and a proton changes to a neutron:

An up quark changes to a down quark inside a proton, resulting in the proton changing to a proton.