When an earthquake happens, buildings can shake violently enough to collapse. If destructive interference can be made to occur inside a building during an earthquake, then maybe the vibrations can be prevented from becoming big enough to bring the building down. 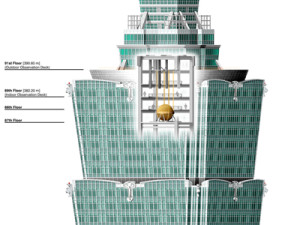 The Taipei 101, formerly known as the Taipei World Financial Center, has a 730 ton pendulum mounted between the 88th and 92nd floors. In fact, it is so heavy that it had to be constructed on site since it is to heavy to be lifted by a crane. It is designed to withstand wind speeds of 60 m/h and one in 2500 year earthquakes.