The two-second gap is a rule of thumb by which a driver can a safe distance behind the car in front at any speed. The gap is especially useful on the motorway, when many cars and heavy vehicles are traveling at high speed, and collisions can be vary serious, involving many cars. People measure the time between the car in front passing a landmark, and themselves passing it. 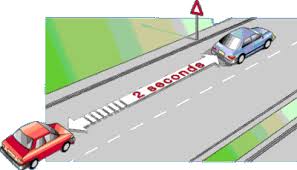