The three methods of heat transfer are conduction, convection and radiation. Whatever the method, heat always travels from hot to cold.

Conduction is the main heat transfer process in solids, much less so in liquids and gases. It is a slow process compared tp convection and radiation.

All metals are good conductors, and hard materials like diamond. 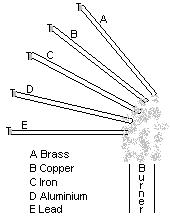 The heat from the flame is conducted along the length of each rod. Metals do not all conduct heat equally well. When the heat reaches the paraffin wax, the wax melts and eventually the pin falls. The pin falls off the best conductor first. In order of conductivity they are:

When heated by passing it through a flame several times, the paper on the brass side is scorched but that on the wood side is badly scorched. This is because the brass, conducts heat away quickly preventing scorching of the paper on that side.

If heat is required to travel quickly through a solid then it is made of a good conductor. Car engines, saucepans boilers and radiators are made of metals.

If heat is required not to travel quickly then an insulator (bad conductor) is used e.g. the handles of saucepans, kettles etc., are made of substances such as wood, rubber or plastic.

Air on its own is also used as an insulator. Layers of still air are used e.g. air in the cavity between walls and in double glazing.

When a material heats up, the atoms gain more kinetic energy (heat energy is random vibrations of atoms and molecules) and vibrate more rapidly. In a sold, the atoms will vibrate about a fixed position in the solid, hitting neighbouring atoms, causing them to vibrate and so transferring kinetic energy to them. These in turn hit neighbouring atoms and so cause energy to be transferred throughout the material.

The above also occurs in solid metals. In metals the atoms are surrounded by a ‘sea’ of electrons free to move. These are also heated causing an increase in the kinetic energy of the electrons, so that they move faster and further. As a result they collide with atoms in the cooler part of the metal and heat is transferred. The combination of these two processes makes conduction in metals faster.

This occurs in liquids and gases, where atoms are able to move.

Convection is quicker than conduction and slower than radiation.

When part of a gas or liquid is heated it expands. This means that its volume increases and its density decreases. Since it is now less dense than the gas or liquid around it, it rises. The cooler, denser material above it sinks and takes its place. This in turn is heated and the process repeats itself.

This results in a movement of material in a circular path, called a convection current.

Crystals of potassium permanganate are placed in the bottom of the water filled flask and heated. As the warmer water rises it drags a stream of dissolving potassium permanganate with it and we see a stream of purple rising. This stream then falls back down as the cooler liquid falls to replace the warm liquid. The purple stream follows the path of the convection current.

The air above the candle rises as it is heated, becoming less dense than the cold air around it. Cooler air, which is denser than the warm air falls down the right hand chimney. The stream of smoke follows the convection current and smoke is pulled with the moving air through the box where it is heated and rises out of the left hand chimney.

Examples of convection currents in practice

1 Heaters – keep a room warm throughout by setting up convection currents in the air in the room.

2 Air Conditioning – keeps rooms cool by setting up convection currents in the air, in the opposite sense to when the room is heated

Daytime breezes - During the day the temperature of the land increases faster than that of the sea because the specific heat capacity of the land is lower. The hot air above the land rises and is replaced by cooler air from over the sea. A convection current is set up which causes the breeze to come in from from the sea.

Night-time breezes - At night the sea has more heat to lose and cools more slowly because of the higher specific heat capacity of the sea. The air above the sea is warmer than above the land and cool air from the land sets up a breeze blowing from the land to the sea.

When hot water is drawn from the top of the tank, it is replaced by the cold water from the tank, along pipe C. Pipe E provides a pressure release overflow in case the water boils. D shows the normal water level in the overflow pipe.

It involves the movement of energy form one place to another in the form of infra-red waves.

cannot reach the tin by conduction because air is an insulator. Also hot air rises, so no convected heat reaches the tin. Radiated heat from the heater is absorbed by the two pieces of tin. This heat is then conducted through the metal, melting the wax and the coin falls, falling from the tin with the dull black surface before the coin from the shiny surface. This shows that the dull, black surface absorbs radiated heat faster than the shiny surface.

Dull, black surfaces are better emitters of heat than shiny or white surfaces.

People suffering from exposure / hypothermia are wrapped in shiny aluminium foil to reflect heat back to the body and keep them warm.