X rays images may be recorded on photographic film or electronically. X rays are only weakly absorbed by photographic film. Images used to be taken using long exposures Today 'intensifier screens' are used. The are screens that emit visible light when hit by an X ray beam. The film is sandwiched between two intensifier screens. Each X ray photon absorbed by the screen produces thousands of visible light photons to expose the film. The X ray exposure of the patient is reduced by a factor of hundreds.
In digital systems, image intensifiers are used. Incoming X rays strike a phosphor screen, producing visible photons. These photons release electrons via the photoelectric effect from the photocathode. 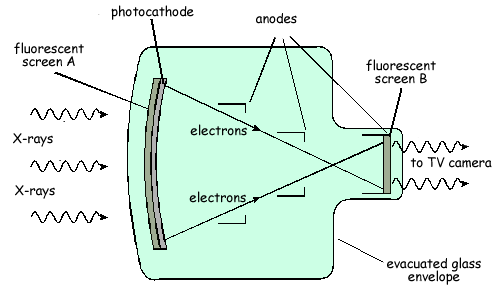 The electrons released are accelerated and focused by the electric field between charged plates, as in a cathode ray tube. The image can be digitally processed and stored.