Charles Babbage (1791 - 1871) was a British mathematician and computing pioneer. He attended Cambridge University, later becoming a Professor. He lectured on calculus at the Royal Society and set up the Astronomical Society.
Today he is mainly known for his 'Difference Engine', and the 'Analytical Engine'. There were machines designed to perform calculations. His original engine, built in the 1820s, was superseded by the 'Difference Engine 2'. Later the 'Analytical Engine', designed to perform any calculation using punched cards. This machine was a true forerunner of modern computers, with input and output, and a memory. Like a modern computer, it was designed to execute a set of instructions - what today we call a computer program, and one was in fact written by Ada Lovelace, after the programming language 'Ada' was named. Neither the Difference Engine 2 or the Analytical Engine were finished in Babbage's lifetime. 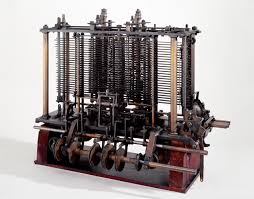