Motion is usually a combination of translational and rotational forces. We can analyse the different types of motion independently.
A translation force is when every part of an object has the same acceleration. A rotational force is when a force cause a change in the orientation of the object, and the acceleration of each part of the object is not the same.
The turning action of a force about a point - the moment or torque
\[T\]
- is the product of the force and the perpendicular distance from the point to the force. This means that a line drarn from the axis to the force makes a right angle with the force, and the length of that line is the distance.
\[T=F \times d_{PERPENDICULAR}\] 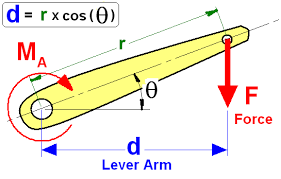 The SI unit for force is Nm. This is not the same as work (Work done = force times distance moved in the direction of the force).