Dimension of a Fractal

Dimension of a Fractal

You can draw a curve of infinite length inside a square. The dimension of the square is 2, but the dimension of the curve is not 1, even through we can parametrize the curve by the length along the curve from its starting point. What is the dimension of a curve inside a two dimensional shape?
We can answer this question by considering fractals, which are self repeating segments of curves at different scales. Consider the von Koch or snowflake curve. 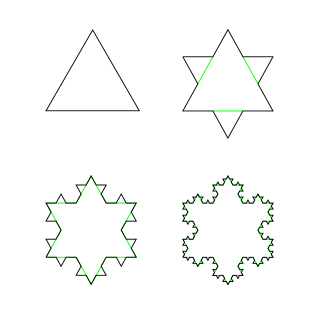 This curve starts with an equilateral triangle. Each side is cut into three and a scaled down equilateral triangle )with scaling factor 1/3) is placed on the middle third of each side.
Each side at each stage is replaced by 4 line segments We can define the dimension
\[D\]
as the solution to
\[N=s^{-D}\]
where
\[s\]
is the scaling factor at each stage.
\[N\]
is the number of similar curve segments that replaces each segment of curve.
For the snowflake curve above
\[4=(\frac{1}{3})^{-D} \rightarrow D=- \frac{ln(4)}{ln(1/3)}=1.262\]
to three decimal places. Notice that this is consistent with replacing a line of length
\[L\]
with
\[k\]
segments of length
\[L/k\]
.